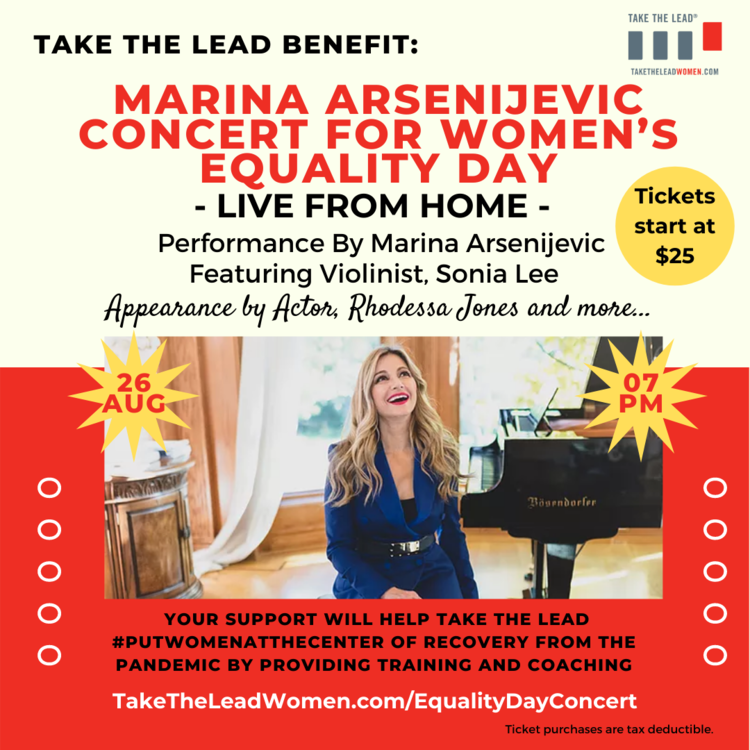 NEW YORK, NY, August 11, 2021 /24-7PressRelease/ — Take The Lead (www.taketheleadwomen.com), a nationally recognized non-profit dedicated to achieving gender and racial leadership parity by 2025, will recognize the 50th anniversary of Women’s Equality Day on August 26 from 7-8 PM ET by hosting a virtual concert and fundraiser. Headlined by Emmy-nominated concert pianist and composer Marina Arsenijevic, tickets and sponsorships begin at $25 and can be purchased online at www.TakeTheLeadWomen.com/equalitydayconcert. Each ticket level brings with it a special gift for the donor. For sponsorship opportunities, contact Take The Lead’s President and Co-Founder Gloria Feldt at [email protected].

During the event, Marina Arsenijevic and violinist Sonia Lee will perform a piece Arsenijevic composed for Take the Lead. Also joining Arsenijevic will be Rhodessa Jones, actor and founder of the Medea Project and co-artistic director of Cultural Odyssey, as well as other celebrities. In addition,the event will showcase women who have been involved and benefited from Take the Lead’s mission to offer direct solutions to the gender disparities in leadership positions, pay, and power. Arsenijevic’s YouTube videos routinely generate hundreds of thousands of views, including one of her most recent performances (https://www.youtube.com/watch?v=YSXsQP7ZINY), which has thus far been enjoyed by over 625,000 fans and admirers in less than one month.

Equality Day commemorates the 1920 adoption of the 19th Amendment giving American women the right to vote. The day takes on additional significance this year as the country grapples with the impact of COVID-19 on women. As a result of the pandemic, 1 in 4 women are considering leaving the workforce or downsizing their careers. Economists estimate that there are 1.8 million fewer women in the workforce than there were in March 2020. Women of color have been especially hard hit.

“Take The Lead’s mission is even more urgent as we recover from COVID-19,” said Feldt. “Our ‘Put Women at the Center of the Recovery’ concert is part celebration, part call-to-action for anyone who wants to support our ambitious goal to achieve gender leadership parity by 2025 and for us to continue to generate programming and services that will assist working women successfully get through all of the damaging professional impact that Covid has wrought.”

Marina Arsenijevic is a global pioneer in classical music’s inclusion, equity, and diversity efforts. She created “Unity Through Diversity,” a concert that beautifully blends patriotic themes with the rhythms and melodies of many cultures and religions represented in the United States. “This is one of the reasons we wanted to have Marina perform,” says Feldt. “We are fighting for all women+, and her music is purposefully inclusive.” Performed with the 120-member joint ensemble of the West Point Band and West Point Cadet Glee Club, the concert has been broadcast to more than 170 million viewers over its 500+ airings on PBS.

“Music was always for me an important ‘tool’ to communicate about issues I’m passionate about and most importantly to celebrate unity and strength in diversity,” said Arsenijevic. “Women make up less than 25% of our top leaders. And the pandemic has pushed millions of women out of the workforce. I believe that Take The Lead is one of the best organizations to solve that issue. They are putting women at the center of the recovery and I am so passionate to help this universal cause in celebrating Women’s Equality Day.”

Proceeds from the concert will help fund Take the Lead’s in-person and virtual training, coaching, and consulting offerings, including its popular “9 Leadership Power Tools to Advance Your Career”, a self-paced online course designed by Feldt for women who want to embrace their power to lead with intention and confidence.

About Marina Arsenijevic
Marina Arsenijevic (www.marinainamerica.com) is the star of the Emmy-nominated Public Television program, “Marina at West Point: Unity through Diversity,” which has been broadcast to more than 170 million viewers with over 550 airings by PBS Stations all across the country. Marina created the program and performed with the 120-member joint ensemble of the West Point Band and West Point Cadet Glee Club. The concert became one of the longest-running single concerts at PBS TV Network in 2020.

About Take The Lead
Co-founded by Gloria Feldt (https://gloriafeldt.com/), Take The Lead, is a 501 (c) (3) that prepares, develops, inspires, and propels all women of all diversities and intersectionalities to take their fair and equal share of leadership positions across all sectors by 2025. The organization’s programs and services for companies and individuals include the 9 Leadership Power Tools to Advance Your Career online course, 50 Women Can Change the World Cohorts, Creating a Culture of Change DEI training, Power to Change Stories, Premier Coaching Program, and The Movement Blog, among others.

Subscribe here for the latest news from Take The Lead: https://www.taketheleadwomen.com/email-signup. 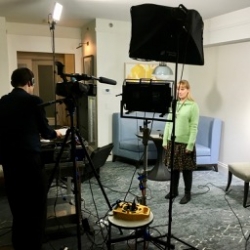 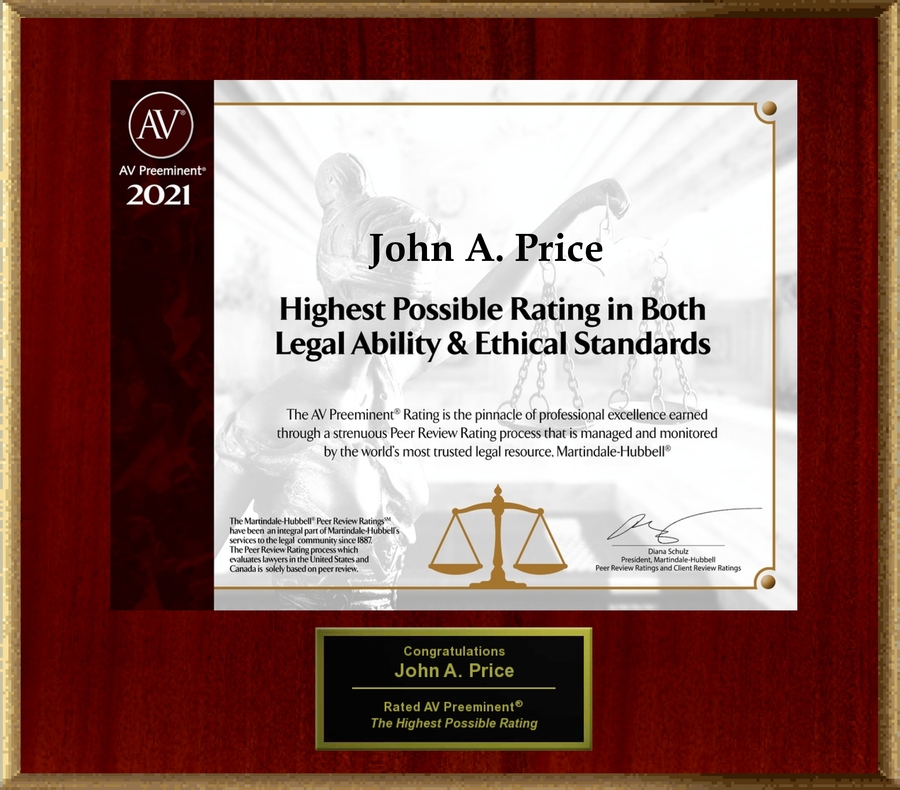 Attorney John A. Price has Achieved the AV Preeminent® Rating – the Highest Possible Rating from Martindale-Hubbell®