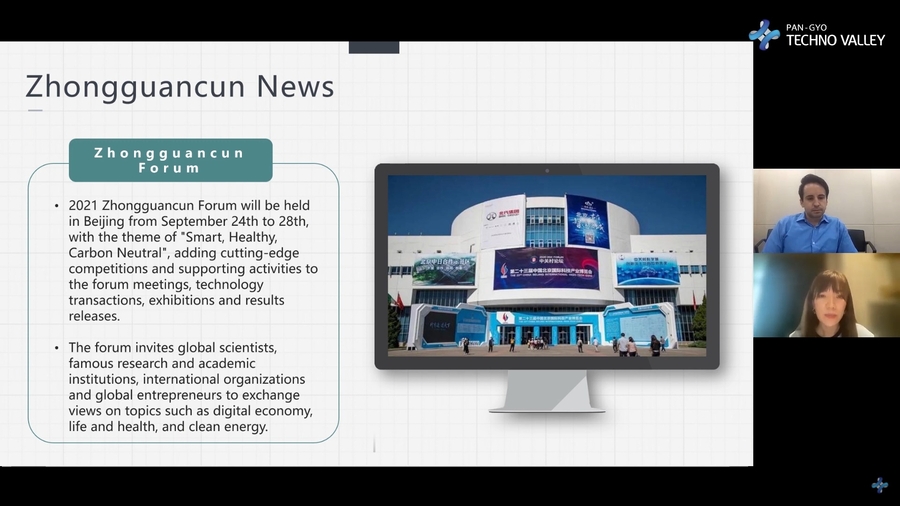 The meeting is one of promotional programs of the Pangyo Techno Valley which has been held every month to discuss major issues of companies in the area with other startup clusters of the world via online.

LOS ANGELES, CA, August 11, 2021 /24-7PressRelease/ — Gyeonggi government held the Online Meet Up on July 27th. The virtual meeting was to promote value of Pangyo Techno Valley and companies in the business zone to the world.

The meeting is one of promotional programs of the Pangyo Techno Valley which has been held every month to discuss major issues of companies in the area with other startup clusters of the world via online.

The place is strategically highlighted by Beijing for its project for promoting science-education. Around 20 thousands companies are in the place including Chinese major IT firms like Baidu, Sohu and Founder and global companies such as IBM, MS, HP and Nestle.

The host of the meeting Alex and a Chinese tech-media’s editor Chen DongFang addressed achievements of Pangyo Techno Valley and Zhongguancun Technology Park, projects of key companies in the two and their investment status and performances.

Alex is participating in the meeting via Zoom | Photograph provided by Gyeonggi-do.

Gyeonggi government shared its startup zone’s status with France before this time. The government plans to share information of startup environment with Silicon Valley of the U.S. for the last time. The next meeting is scheduled to 24th of August. Videos of the series of event are uploaded to the Pangyo Techno Valley’s Youtube channel, Pangyo Techno Valley.

An official of the municipality said “I hope the meeting helps us promote Pangyo Techno Valley and its companies to the world and exchange with them,” adding “The government has carried out various projects to let the world know about companies in Pangyo. I hope Pangyo Techno Valley’s Youtube channel and homepage become a useful promotional channel.”

Pangyo Technovalley is an innovation hub for global companies comparable to the Silicon Valley in the US, Zhongguancun in China, and STATION F in France. It is an Asia tech hub with 1,259 IT, BT, CT, and NT companies that possess innovative products and technologies. Located just south of the metropolitan area, it provides the best environment for Korean companies to do business with great transportation access and infrastructure.

With the support of innovative companies with global capabilities such as Kakao, Naver, AhnLab, Krafton, NCSoft, Nexon, and Hancom, companies in Pangyo Technovalley recorded 107 trillion won in sales last year. Investment and infrastructure growth in Pangyo is expected to continue, with the Metaverse hub entering Pangyo this year