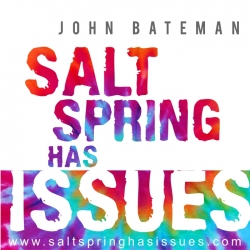 John's humorous observations and quirky and surprising writing style has found him many fans over the years, including legendary Canadian broadcaster and writer, Arthur Black.

"Needless to say, penning a humour column based on daily Salt Spring life calls for some exquisite swordplay worthy of a D'Artagnan. Bateman's got the chops. Here he is on perhaps the most pernicious and persistent custom that plagues Salt Spring:

"Hugging on this island has truly transcended the traditional, face-to-face technique. Being world class innovators in the fusion of the emotional and the physical, Salt Springers have pushed the boundaries of what qualifies as an acceptable embrace. Here, appropriate arm and hand placement is not considered a priority. Also not a priority is dress, or lack thereof. There is no guarantee that someone wandering around town topless won’t move in for the kill.

"You wanna know the real Salt Spring? Buy this book. That way, you'll have an issue too." ~ Arthur Black

Whatever your perception of Canada's enigmatic island may be, throw it out the window and get the, truth is funnier than fiction facts from Salt Spring Has Issues. 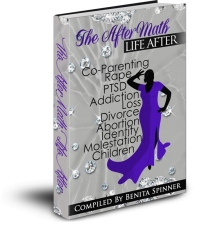 Entertainment Company Head, Benita Spinner Publishes the Voices of 10 Women Who Have Triumphed, Introducing “The AfterMath Life After”